I have no idea since when you guys read my ramblings here. But with a quick search in my past entries, you'll see that at the end of each year, for the past 2 or 3 years, i tried to post some "End of the year thoughts". See here, here.

This time i decided against it. I have more reasons:

For blogmas day 10, we were supposed to talk about the Christmas menu. And I did. And i mentioned that, traditionally, in Romania, people like to make salad à la russe.

I looked through my shared recipes and i noticed that i haven't shared this one yet, despite having made it quite a few times already.

We wanted to make a lot of salad this time around because we really like it. This wasn't the best idea ever but we did it anyway, so here we go.

We used for the salad:

We decided to make our own mayonnaise, but to also buy some, in case I fail at making the mayo. I remember the first time I made mayonnaise - it was thick, yummy, and I was proud of myself.

Most likely, after that, I was over-confident, as the next other times I made it, it didn't turn out quite the same. Oh, well, we live, practice, and then we become better.

For the mayo I used:

For decoration: (you can use what you have on hand, these are the most common things you'll see in Romania, on this dish)

For this salad, we have to boil the potatoes and the carrots, then dice them. The dice shouldn't be too small, nor too big. You want the dice to be actually smaller, rather than larger, so that the salad would have a smoother appearance.

If the dice are larger, the salad will look as if you made it with rocks and boulders instead of potatoes.

We decided to boil these 1 day ahead. And as you can see from my pictures, i boiled the potatoes for far too long. They shouldn't crack like that. The potatoes should be cooked, but firm for this salad.

Maybe I should have used red potatoes? I have no idea, but almost every time I try making this dish, I overboil my potatoes and they're far better mashed than diced.

As you can see, I used larger pieces of carrots. I think by weight, the carrots are half the weight of the potatoes, maybe even less than that.

Given the quantities, you'll need a very large bowl in which you'll throw everything for mixing.

I suggest that on the day you want to prepare this, you first make the mayonnaise. If you don't want to make it, you better buy 2 bigger jars of mayo.

To make things better, get the fancier, more expensive brand. It should taste better. The type and taste of the pickles, as well as that of the mayonnaise, are the secrets to this dish.

These 2 ingredients will make or break the taste of the whole thing and will decide if you like it or not.

So, to make mayonnaise, you have to mix the hard-boiled egg yolk, the raw egg yolk, some salt, some mustard, with plenty of oil.

The best tool for mixing, I noticed/learned to be the vertical blender part of your mixer. You add the oil bit by bit, and you might also need to add some salt and mustard from time to time.

If you think the mayo looks too thick (almost like cream cheese) you can add the raw egg white as well. Try not to add it all at once as you could ruin the result, or it may take some time for the mayo to re-gain a decently thick consistency (yogurt-like).

Once you figured the mayo out, cover it and put it in the fridge to rest. Now you can start dicing the potatoes, carrots, and pickles.

You throw these in the large pot/container along with the drained peas. For reference, I used the pot in which I boiled the potatoes after cleaning it.

At the end, you can also throw in a hard-boiled egg you diced. This improves the taste of the salad. Don't forget to add some salt in with everything, or this will be a bit sweet and tasteless. This is not something you want.

As you can see, I diced my potatoes in sizes that are a bit too big. They should have been half that size, thus slightly larger than the peas. I also forgot to add the salt. And that's not the only thing i forgot to add.

Now, it's time to add in the mayonnaise and to get your hand dirty. Mixing with a spoon is fine, but I feel I have better control over the mixing process if I use my hand.

Once you're done, you can transfer the salad to other containers or plates, for decoration. I used 2 plates and a big soup bowl - i forgot its name.

And then, you'll need to use your imagination on decorating these. Nature-inspired decor (like flowers, or the sun) looks the best - somehow it balances out the heaviness of the mayonnaise. Red, orange, and black give it a nice visual contrast.

Above, you can see the decor I came up with. I had black olives in the fridge, but i forgot about them at first. I added some after, but i didn't take pictures anymore.

Like i said, this is best eaten the day after you prepare it, so that the flavors mix in a bit more. We eat this usually on its own, but with bread. Extra pickles also work, as there is plenty of mayonnaise to make one nauseous. I think it's served before dishes with meat.

I hope you can give this salad a go and that if you do, you'll enjoy it as much as we do.

I haven't posted a recipe in a very long time, i believe. I think it's time I shared something - a salad this time! It's easy to make, pretty good for the upcoming holidays, delicious in my opinion, and is also vegan friendly!

Well, ok, what I'll share is not vegan friendly because I used eggs, BUT keep the eggs out and you can safely enjoy it! If you're wondering why I had to specify this is a Romanian version of the salad, is because Google showed me a different type of salad when I searched for the name of this dish.

I'm not exactly sure what's the story behind this salad, all I know is that it's pretty easy to make, and that it's never enough. This is the list of ingredients for a basic salad I found on a Romanian website. I know some people add more stuff in this salad. One of the most common ingredients is sliced onion, but you must know we don't eat it. Other ingredients I noticed were shredded cabbage, raw cucumbers (along the pickled ones), and pickled beet, and the salad becomes a bit pinkish.

Do not add any type of meat in this salad, because then you'll make something else. 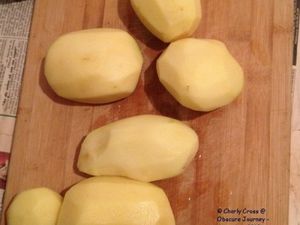 Start by peeling and dicing the potatoes. Then throw them in a pot with water, and place on medium heat. Don't forget to add some salt - I used some pink salt, not that it really matters, but we were curious. I boiled the potatoes for some 30 minutes, but I don't think I had 1 kg.

The next step is to slice or dice the rest of the ingredients, including the olives and eggs. Don't forget about the other ingredients you want to add.

Next, when the potatoes are done, rinse them with some cold water, and mix them with the ingredients. Of course,don't forget to add oil, vinegar, salt, pepper, and the herbs. Look at those vibrant colors! This salad is eaten usually by itself or sometimes maybe with steak or chicken. There's no need for bread when eating this dish. You might need to eat other dishes before or after it to feel completely full.

I hope you like it if you make it!

So yesterday we received some zucchini and their season seems to have started. I'm not entirely sure about that. In any case, "A" really likes patties made of zucchini, and for good reason: they're pretty light, despite being fried, as there's no meat in them. They're also pretty good, if you have a good recipe.

While there's no meat in the recipe, you need some eggs or some other agent that can successfully replace the eggs. The egg is meant to help the patty stay in one piece, to enhance the taste, and there was another reason i forgot. So this is not a vegan recipe, but a vegetarian one.

Read below the pics for ingredients and instructions!

You'll also need a grater/shredder, 2 bigger bowls and a smaller one, perhaps a sieve as well. 1 big zucchini and an extra random piece, a big carrot, some salt. make sure you have more zucchini than you have carrots, if their size are different.oh, and you guessed it: no weighing in this recipe. shred the zucchini and the carrot together squeeze out the juice. I did this twice. mix with the eggs, season with some salt, black pepper, other herbs you like and other flavorings. NO SUGAR! also add some flour. it should look similar to this. time to fry in a bit of oil [about a spoon?]. Make sure they're evenly done on both sides. you can put as much as you want in a patty, but make sure to flatten it. 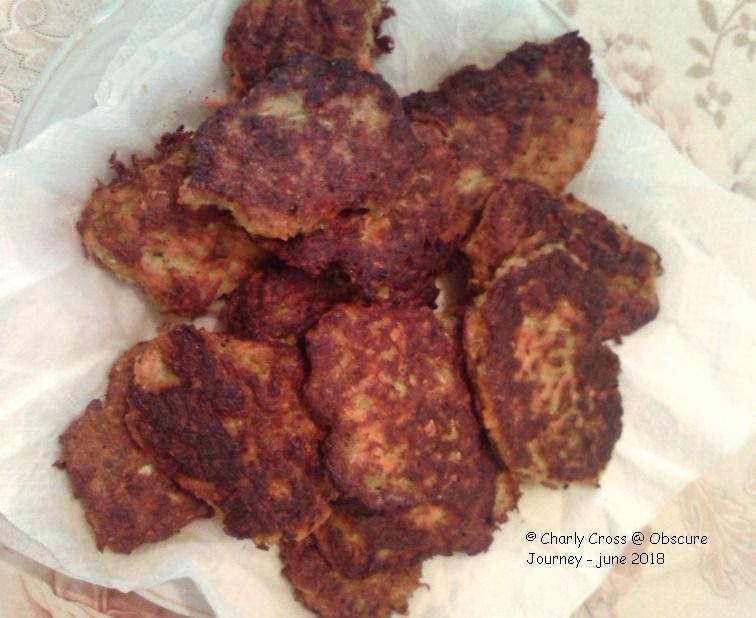 You can now enjoy! Best served cold. I had 15 patties in total, but I ate one before taking a picture of all of them. "A" said they were really good :)