In August, i wanted to adopt a cat from the 'cat gang'. I think the people 'running' it are scammers. They have many cats in their care. Most of them are being kept in a single room. None of the cats receives natural light or fresh air. The pee and poop stench is unbearable. Out of the 20-30 cats (i dont think there were 50 as they claim) ONLY about 3 were up for adoption. About 10 had 'sponsors' and while they didnt say up front, i understood they dont want to lose the sponsorships.

If this isnt scam, i dont know what is. These people exist and they give a bad rap to those who really want to find homes for the cats. She also didnt want to give any cats to those living in a house (vila) 'because it can escape'. Im sorry, the cat can escape from any place. While we visited, we had to make sure the cats didnt escape from their confinement in that stinky room - who wouldnt want to escape from there, though? No wonder people will go buy a pet instead of adopting: adoptions are being made nearly impossible. And they also wanted to neuter the cat themselves - why cant i neuter my own cat?! /rant and warning over.
Sorry for promoting the place earlier, but i was deceived by their chattines, and i dont want others to fall for the same scam. 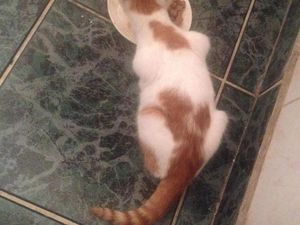 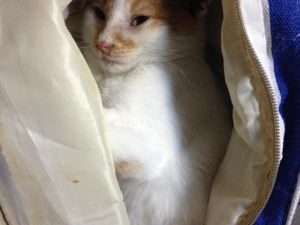 Gin the cat, found on the streets

I still wanted to offer a warm home to a cat who needed one. I contacted other people who had cats up for adoption, but their way of talking was condescending. Being close enough to 40 years old, I can't accept people to talk to me that way. So, i gave up the idea of adopting cats from people.

Considering, our first baby, Whiskey who is now 9.5 years old, was found on the street, i decided that the 'right' cat will appear in front of me, on the streets yet again. On the last Thursday of November (Thanksgiving day in USA), we found a small cat colony who needed some help.

We fed them, and I managed to catch the kitty in the picture above. Taking her to the vet, we learned she was about 3 months old, and suffering from a cold. She received injections for 3 days along with oral medicine at home for another 5 days.

We named her Gin, but for some reason, I sometimes call her Milky. This is Whiskey, last year <3

Gin's fur is very soft, she learned that petting her is nice, she learned how to ask for food when she's hungry, and which is her litter. She's also very fast at running, and she's very funny.

My other 2 cats were not bothered she came, though I can't say she was happy she had 2 older brothers that look huge next to her.

I think we did the right thing by not taking cats from people but waiting for one to cross our path in a 'natural' kind of way. 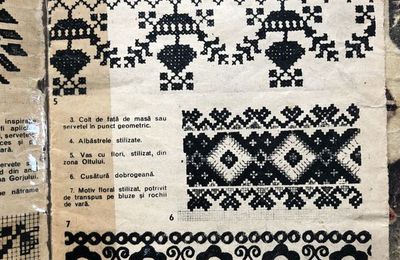 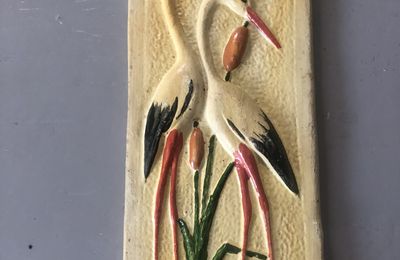