We finally managed to visit this museum and document our visit through pictures. I didn't walk so much in ages! My feet are killing me - I'm writing this right after the visit, at a café where we stopped to get some rest. If I don't get distracted, I'll post the second part of the blog, next week. Why a second part? Please read on to find out!

We reached the museum by foot from the subway station - it's some 2 -3 bus stops away? At the entrance there were at least 4 tourist buses, and this meant the place was rather packed with people. The admission fee is 15 lei for adults, 4 lei for students, 200 or 300 lei if you want a guide [fee depends on the language you need the guide to speak], and there were a few other rates but I can't remember who or what were those for. As far as I can tell, this is the main entrance. There is also a gift shop on the right, right across from the ticket booth. I really liked some of the stuff there, though I must say some seemed a bit overpriced. Not that I'm familiar with prices for this kind of products. Sadly many houses were closed, so we couldn't see them on the inside. Well, A. [my partner] couldn't enter the houses anyways, though she tried - because of a hay allergy she has. There are also a few rules to follow, such as no smoking anywhere in the museum [though it's in the open] and no taking pics inside the houses. I would assume it's because the flash of the camera can ruin the colors of the decors.

Visitors are not allowed inside the house, with very few exceptions. So I entered a couple of houses, but only in the small entrance/hallway of the house, and not inside the proper rooms where the occupants used to live. You can only imagine why: on rainy days bringing in the mud would eventually ruin the floors, while also just stepping inside some of the houses would also cause damage.

I must add that many houses had either a wooden floor either floor made of dried out mud - a building material I noticed in the walls of the houses as well. This was a convenient building material in the 18th century, a place in time most these houses belonged to. I believe this is what kept them so cool and pleasant - there were 27 degrees Celsius [80.6 F?] outside.

If you wanted to go even cheaper, you'd make a half buried house, like the one below. I guess the insulation was better? I do wonder just how cold it was in winter, though? I couldn't go inside, but I must say the entrance looked creepy and claustrophobic. There were also many vendors selling handmade things: clothes, home decors, jewelry, dolls, and other stuff. Pretty much what you could find in the gift shop, you could also find at this vendors, and then probably some extra. The prices were equally high, but we bought some cookies - but I only have a picture of one of them. One of the vendors in front of this buried house was selling traditional alcohol, in special looking bottles. He had several shapes and sizes. While there was nothing wrong with opening the bottle up and drink, many were just for decorative purposes. Clearly, not for houses with pets or kids that can knock them over. The bottle below costs about 10 USD. Speaking of drinks, there was one vendor selling a very strange summer drink. And what I mean by this s that it was refreshing, but very sweet as well. The drink's name is "braga" and it is made of cereals - read more about it here and here. I bought a glass, see below. My partner said her mother used to drink it a lot, and liked it a lot as well. My partner doesn't share the opinion. The drink is good, but like the articles point out, it looks really rustic and must be consumed really fast.

Another vendor was selling copper ware.  I will consider buying some pieces for our future home, after we have it. These copper pieces had a different color on the inside than on the outside, so I'm not sure this is how copper items are. In any case they look beautiful, don't you think? Lastly, I shouldn't forget to mention the last vendor selling beauty products. We received each a sample of a scrub mask. I can't tell if it was good, but we might visit their shop outside the museum to get a product or two. Like mentioned before, the museum has many types of houses, a couple of churches, wind and water mills. Most houses had fences, gates, and their original annexes. These annexes include old-fashioned ovens for baking the bread, dog houses, tool sheds, houses for the livestock. Now, on with the pictures of some of the houses. This next yard and house are a unit, i believe. This house was not opened to the public, but it had an overall quiet feeling. 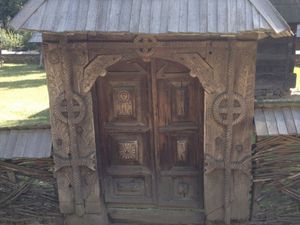 This was pretty much another household. I would assume its former inhabitants were more rich since the house was build on 2 levels and they also had this carriage. On the left of the "garage" there was an enclosed space - a tool storage unit, I believe. 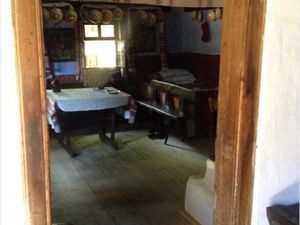 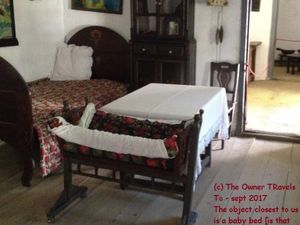 This house was also pretty big, and the rooms were like a train's carriages, as you could easily see in the first picture. This was a rare sight though as most the other houses had separate rooms and no way to go from one into the other. I believe the caption says it all at this point. People were shorter in the past. The doors and gates are short, but the rooms are plenty tall on the inside. 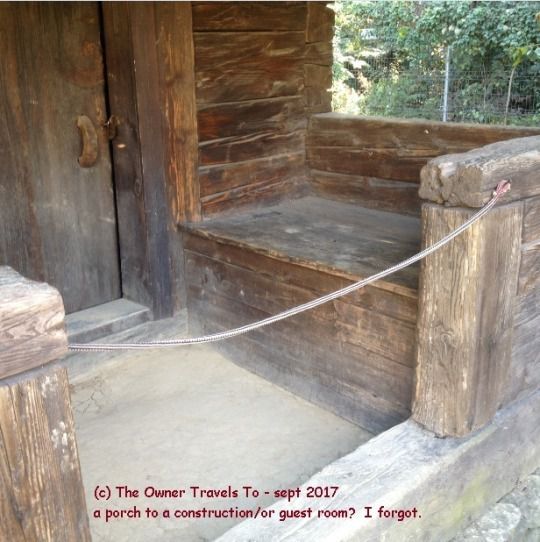 Judging by the time stamp, this extra construction was on the same land as the house. the colors on the bed were more vibrant

WOW, What an adventure! Both the visit and writing this - or better said, editing the pictures.

There 's a part 2 coming up soon, with the animals we saw at the museum! And in the park surrounding it. I just hope it will be soon enough.  [I hope there aren't too many mistakes and errors in this entry.]

© Charly Cross 2013 – present. previously known as The Owner Travels To. All rights reserved.