A disappointing school festival a la japonais in Bucharest

So, first things first. This entry is WAAAAY overdue, oops, as the event took place in March 2018. I was so disappointed with it made me delaying talking about it. But I still have the pictures, and I think the idea was rather cute, though some might find it  a bit ... of a cultural appropriation, and you'll see why in just a second.

A bit of a background

In February of last year, I saw the ad for a school festival, done in Japanese style. In Japanese, "bunkasai" means "Cultural festival ." I believe this was the 2nd or 3rd edition of this bunkasai, and was inspired by the school-life of Japan - most likely because this is the only school in Bucharest teaching Japanese. I learned about the event from Facebook, and it seemed interesting enough to go check it out. Gotta say that such festivals are not done over here, unless things have changed, and I didn't get the memo. inside and around the school

As you can see fro the above pictures, there was snow on the ground because a couple of days before, a snow storm hit us.

The Facebook ad was mentioning all sorts of attractions at this festival, such as sushi, a haunted house, workshops with origami, caligraphy, drawing and not only, as well as (maid) cafes - basically what you'd expect to see in an authentic event in a Japanese school.

Everything sounded great, at least on screen. But of course, the reality was ... different to say the least.  It was disappointing ... and a bit cringy. Mostly because it looked like a cheap imitation of the real thing - with which i'm familiar only from manga and anime, where it looks different. Add to this, the fact that some of the students organizing the whole thing, were wearing yukata (=a type of kimono worn in summer, made of thin fabrics) in winter! Just no!

We went there towards the end of the day, and this meant that most of the stuff were over or sold out, if you wanted to buy something. This added to the disappointment. To enter the haunted house [or room, better said] we had to wait in a long line, and we just didn't feel like waiting.

Let me show you some more pics from that event, though they're not great in any way. 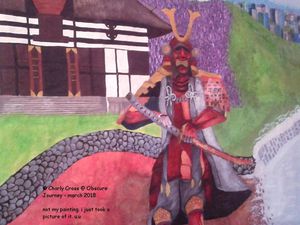 the halls were decorated with large paintings made on paper. art from the drawing workshops, various writings from the calligraphy workshop, and the entry to the haunted room

I hope any future similar events will improve. I also think other schools could get inspiration from it and make their own unique events, or events that are more connected to Romania's identity and cultural heritage.

We didn't spend a lot of time there, so we left. We went to McDonalds at Unirii Square. We got some fries that we gave to the seagulls on the river. It took them a couple of seconds to eat the fries. I don't have enough pics, and the ones I have are not even good enough, but I hope you like seeing some birds.