This is a continuation of this post here. I didn't want that entry to be too long, so here we are.

I also wanted to talk about this relative of Anna's. She was the cousin of Anna's mother, on her mother's side.

This poor woman is no longer with us. She died at the end of 2020 from some heart-related issue, in a mental hospital. She was diagnosed with schizophrenia years before. Her mother had also died earlier in 2020, in the same mental hospital.

The mother was 91 years old or something, and the daughter 60-something. The daughter was so out of touch with reality, she had no idea where she was or why. :( Of course, she also had no idea her mother was no more either.

This is the daughter with her adoptive father, sometime in the 1980s maybe, by the style of the photo.

What is left of these 2 women is literally not much. There's an apartment and a studio that will be sold by the family at some point.

There are little to no other valuables they left behind. From the mother, there are the Chinaware i talked about in this post and a few pots i took from their apartment. There was a family photo album as well, that we gave to Anna's mom, since it belonged to her relatives.

We also managed to salvage these 2 coffee table books:

The book on New York sells for around $2.5 on local sites, as it's by a Romanian author. The text is both in Romanian and English. The art book on Chinese prints is written by a Russian woman, and I saw it selling for various prices, starting at some $26 and up to $126.

We like both the Big Apple and Chinese culture/art/history/traditional clothing. It goes without saying, these books will stay with us. We wouldn't have bought them if we saw them in a store, to be honest. But like this, for free, why not?

Everything else had to be discarded because they lived with bugs literally crawling everywhere, in an unbearable smell of feces, bug spray, dust, and only the Lord knows what else.

Of the daughter, Anna kept these 3 notebooks. She wrote many notebooks. The ones we found/kept are dated 2013-2014.

These notebooks have been used as planners, a diary, and somewhere to write her wishes, hopes, and random thoughts, basically. 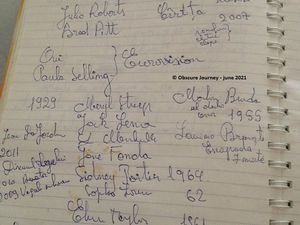 These are a few pages taken from 2 of the notebooks. The diary's name is "Anca".

I like her handwriting. It shows her pain and hopes at the same time. I think she got bored or tired fast. Most likely, suffering from schizophrenia, this is normal.

I myself try to write neatly when I put my hopes up for a change. It's like a prayer. Also, a meditation at the same time - writing neatly requires more effort and concentration.

On some of the pages, The aunt was writing "we will get married." I believe that was more like a manifestation, her greatest wish. I think she also wished for her mother to live as long as possible. And, well, she did.

Their apartment is on the 4th floor. All the windows had bars on them to prevent the aunt from jumping out the window. She must have felt even more like a prisoner, not only in her body/mind without proper medication, but also in her house, though it was for her own safety.

That poor woman (her mother) lived for so long because she probably felt that nobody else could take care of her daughter. And she was most likely right. Though she was also in no condition to do so either. Not anymore. She lasted in the mental hospital for like half a year. I think she either realized she no longer has to worry about her daughter, or she finally gave up. It's hard to tell.

If you read thus far and you see someone struggling, try to help them. Remember that not everyone shows their pain the same way.

Until next time, stay safe!