Last year around this date I went to the store to buy some stuff. On my way there I saw with ugly puppy that seemed lost as I saw no brothers nor his mother around. It was cold, and he was hungry. Needless to say I felt so bad for the little thing and I wanted to do something for him. I went home with the shopping bag, but then I somehow went back and took him home with me.

While going home, he started kissing me, and I too a better look at him only to see he's not actually that ugly. Reaching home, the first thing I did was to check his gender, which to my surprise was 'female.' So I had a female puppy dog to care for. however my house was already populated by 2 demon cats, and only one of them saw a dog before. These 2 cats were not too happy to see the new comer. 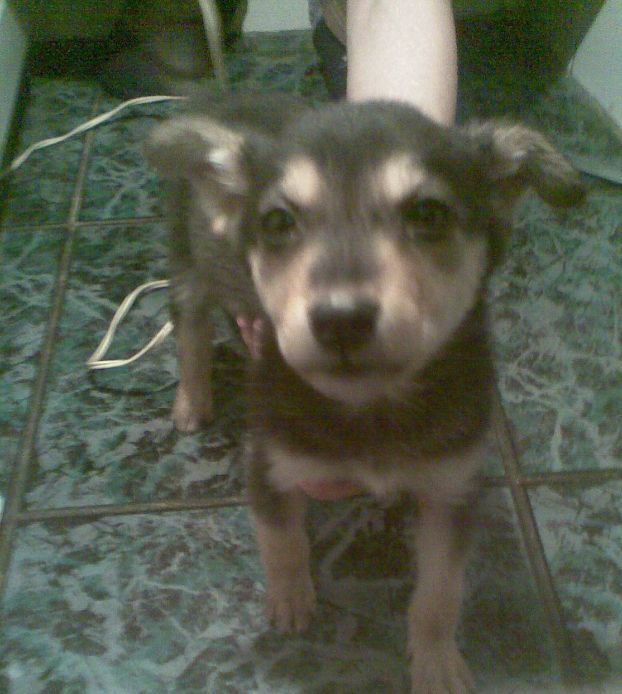 Kali on her first night with us

I didn't plan on keeping her with me forever, and well, in the end this wasn't the case. It doesn't mean I didn't get attached to her, because I did. I named her Kali, after the Hindu Goddess. If you're curious, this Wiki page has more information about the Goddess.

The first things I did, was introducing Kali to some food and water, and boy was she both thirsty and hungry! Poor thing. Of course, the only food I had was some cat food, but for the time being it was more than enough and ok. The next day I would go to the pet store to buy some puppy food. The 2nd thing I did was to give her a bath because she wasn't the cleanest puppy ever.

I gave her a thick scarf I spend a whole year knitting, for myself. Yea, you read that right. However it wasn't something I could easily wear, so it seemed something that would keep Kali warm enough as her fur was so short.

Of course, when time was right, I went to the vet to give her the required shots. We couldn't go out anyways because she was too tiny and it was too cold and snowy outside. After some 4 months, I had her spayed. It seems that there is a new law that requires all pet owners to spay or neuter their dogs if they don't have a breeding license. Not knowing Kali's breed, or her parents, this was out of the question. Also I didn't want more puppies to deal with. People here want mostly pure breed dogs, and who can blame them?

Kali grew up a medium-sized dog that would eat literally anything you'd put on her plate, healthy, and very energetic. She didn't mind the leash nor the collar around her neck, not even the firs time I put them on her. How lucky is that? Yes, this is the same, dog, her face changed a bit. at about 5 months old.

To take this picture, I had to tie her leash to the heater, or she wouldn't stay still. She was that energetic and excited, haha. Based on the angle, her ears looked quite big compared to the rest of her. Everyone would comment on he ears.

Her favorite activity was going out on a walk. Because she was a very energetic dog, we had to take rather long walks, so she would get tired.

What she disliked the most was seeing people sitting around without doing anything. This included random workers we would see during our walks. They were wearing uniforms, and she seemed smart enough to realize they were supposed to work. Seeing them just sitting, even if they were eating, she would bark at them. I had to explain to her they needed to rest a bit so she wouldn't bark anymore. It almost always worked, and every time I thought of this behavior as funny.

Walking Kali everyday was a good thing for me. I managed to go out, breathe some "fresh" air.. Living downtown, on a high traffic street takes away from the freshness of the air, after all. It was still better than staying indoors. It also made me feel more cheerful and not awkward about being out. Despite her medium size, Kali was a strong dog, so I always had to have a good grip on her leash. This made my arms stronger, while tiring me some. I sure didn't need to stop by the gym thanks to her.

Kali did like to cause trouble. Or it was her need for attention. As a highly energetic dog, she need a lot of workout and attention. I'm not an active person, but I was more active while caring for this dog. After 8 months, I realized that our living conditions weren't what Kali really needed. At the time I also had a lot of work to do [for my job] and I slowly realized I don't have time to go out with her as much as I used to. As much as it hurt me, it was time Kali found a more suitable home.

One month later, we found a family [friends of friends of relatives] who owned a house with a yard, they had a teen daughter, and were more experienced in raising dogs. Going there for a visit seemed fortunate. They loved her and Kali seemed to go along well with everyone else. She never minded meeting new dogs or people, and the environment seemed 1000 times better than what I could offer her. I knew she was going to be fine, and I get news from time to time that she's happy. This is all I wish for her.

Would I do this all over again? Surely not. I sure miss Kali and I do want another dog. However now this is not possible. If I ever decide to get a new puppy, I would make sure to find one with an energy level that matches mine and hopefully, a small breed dog.

Have a nice new year, and don't fall for just any stray puppy or cat you see on the streets.