This entry was quite long in the making, for several reasons: my poor memories, recovering and editing the pictures, and actually writing everything, in between other stuff going on in our lives. Published a bit later than hoped, but not that late, and better than never at all ;)

Last week of March was when all the winter happened as the worst winter weather hit us. Luckily, as soon as April started, the weather also turned into spring. It never snowed again, after that. YAY!

Since the weather warmed up, we were able to go out more and have various adventures. these flowers appear later in the month

The month started off with the Easter celebrations in the Catholic world, but Romania is an Orthodox country so we had Easter on the 8th, 1 week later.

During the first week of the month we were quite busy, and we couldn't wait for Easter to come so we'd relax a bit. Luckily, in Romania Easter Monday is a bank holiday so everyone stays home to relax and eat.

At 11 pm on Satuday we went to the church to to hear a bit of the mass and to bring home the "Light" - or a lit candle. All Romanians do this for good fortune in the "new year" [from an agricultural point of view].

Check out this video for a little insight into how the midnight mass goes. many people heading towards the same church

The next day, on Sunday Easter we were supposed to go to A's parents' house. And so we did. They moved out of city, but luckily the city bus takes us close to their new place. We had to walk from the bus stop to their house because the usual minibus driver doesn't work during major holidays like Easter.

A small feast was waiting for us there - see the picture below. That's a cheesecake that replaces the traditional pasca which is a bit different both in looks and in how's made.

The slices with boiled eggs in the middle are a special meat loaf made only for Easter, called drob.

You also get to see a bit of the countryside, from A's parents' balcony, in the pic below. 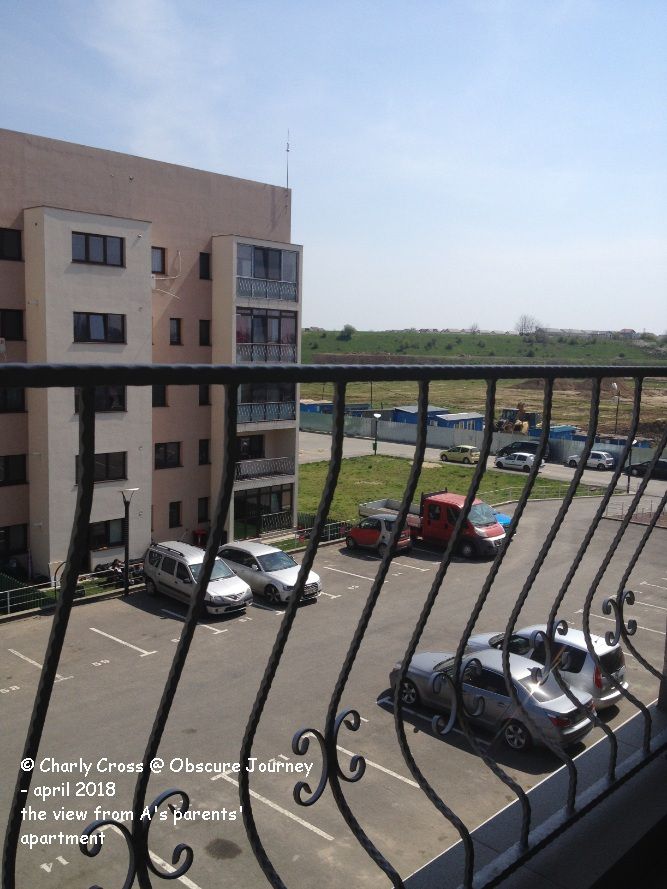 Some time later, A's birthday came. That day we had to go with the older cat to the vet. He wouldn't eat and he would throw up if he did. The vet said it's just a gastritis, and gave him some shots and home treatment.

Everyone praised Whiskey the cat for his prettiness and for being such a good boy.

The next day, in the evening we decided to have a bit of fun. Or to try to relax a bit. So we went to see a movie - A Quiet Place. You probably already read my thoughts on the movie, and if not, by following the link you can do so now. 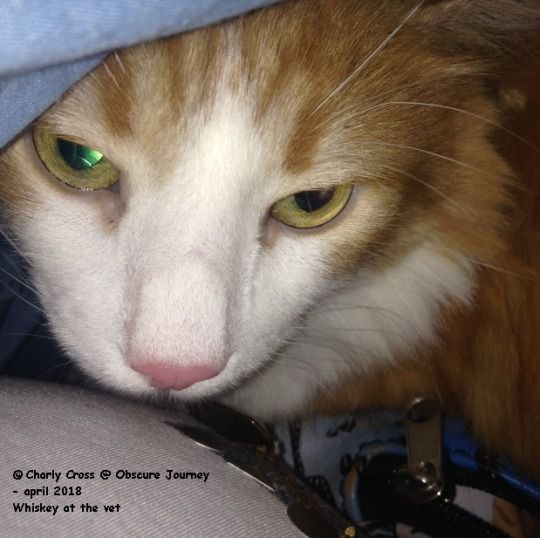 he was in my arms and trying to hide :)

We also had to go search for a specific cat food, that we learned we can find at this rather new mall that opened not too far from us - some 6 tram stop away, and that's close. Check out this post about the public transportation in Bucharest.

There was an interesting place where they would only sell French fries. Of course we had to try them out. And I personally wasn't impressed - only 2 guys taking orders and serving people, so I had to wait some 30 minutes? The taste wasn't impressive either, but the fries were made on the spot which also added to the waiting time.

And while I did say these were fries, they weren't thin like at McDonalds, but thick type, wedges. I also think they needed to be cooked for longer and maybe at lower temperature?

In any case, we saw another location downtown, in the Old City Center area which is easier for us to get to. One day A asked me for avocado on toast. So I made some. Not much to say there, but it's too small to make a separate entry on it.

Toast the bread. Cut open the avocado, remove the pit. Slice it up or mash it and spread on the toast. Then serve.

I discovered avocado tastes better with a dash of salt on top. If you think this is weird, wait for my entry on the weird foods I sometimes eat and enjoy. After some time, I decided to make some doughnuts. I decided to follow a Romanian recipe for "Little Lies" which I have to tweak. The recipe I had gave me some cookies or biscuits instead of donuts, which is probably why they're called "Little Lies" -in Romanian minciunele.

However, they were pretty sweet and worked well with tea and coffee, and there's that at least.

I have this cat shaped cookie cutter and I decided to make some of them shaped like cats, because why not? I got the cookie cutter as a freebie from a box of margarine. It was meant to make cute looking sandwiches for your kids, but that's too much work for me.

Once I find recipe that I like better, I'll share it. Till then, just a sneak peak at my Little Lies. 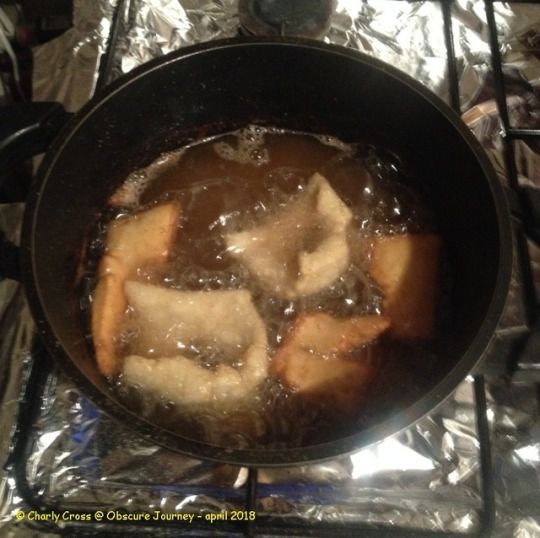 all dough-nuts should be covered in confectioner's sugar, if you ask me.

At some point we went to a cafe for the first time in ages. Or it felt like that to me. I think we had hot chocolate and tea? or something like that, I completely forgot. Some time after that, I decided to turn some old shirts I had into pillow cases. I like doing things myself the most - this makes me feel accomplished.

The blog entry will appear in June, [which is awesome because I discovered some pictures I forgot to add] however the idea was born in April and was mostly performed in May. If you read this entry when it's published, the link won't work, but if you read it some time in June, out of curiosity, it will work. You can have a little sneak-peak below. Of course, my oldest cat decided to help out.

We also had some work to do, and we still did go out after that. But nothing much happened, except for the adventure we had outside of the city, in search of an outlet. I'll let A talk about it, as it was her idea and i'll just add the pictures in.

A month ago we decided to go to an outlet store that was suppose to be in an area we haven't visited before. However, we had no idea of how this trip was going to go. We sure didn't expect what was coming ~

First of all, we got in the bus and as we looked on the map, realized it was gonna take at least 22 long stops. 22!! We never really went that far. Beside that, the day was quite hot, it was a rush hour, and the bus was packed with people. So half way there i started feeling nauseous and like i had no air...many of the people in the bus seemed to have no problems as if they were used to it ~

An hour later (no joke) we finally got off the bus. It was pretty much in the middle of nowhere, and even tho we went to other malls that are somehow out of city, this one was different. The entire area didn't seem safe at all, there was a lot of shadiness. We crossed the street and started walking by these what seemed to be abandoned houses and trying to make sure no stray dogs were gonna bite our ass. It wasn't comfortable at all and i felt quite unsafe...after walking a while trying to gather all our courage we ended up crossing a street to get to a railway and in that moment, we started to think what the hell are we doing. The mall didn't see to be in sight, actually there was nothing like a mall in the area at all. That's when we decided to turn around and go back as we didn't want to end up being there at night.

After more waiting for the bus, it finally arrived and we got in. But, since we were already out, we thought it would be a good idea to go to another mall that was located somewhere halfway through the trip. And so we did.

Well, this mall was a lot better. We got to rest a bit while exploring it. I was looking for some sport shoes and at the very least they had some options. When we got really tired we went outside to a cafe to sit and eat something. We had some fries and a burger that were not impressive. The burger was supposed not to have any onion, but i found a big layered slice of onion in it. At least it looked funny.

At that point we just wanted to get back home but didn't know how. We started looking at tram schedules to see which one we need to take, and spent some 15 minutes waiting in a stop. Then we realized that might not be the right stop as the tram we were waiting for somehow turned into a different one with another route. Pretty discouraged we went back at the mall and after waiting some more and trying to figure things out, we called a taxi.

Luckily at least that was uneventful. The taxi came fast and took us home, where we finally arrived home, 6 hours after heading out in the first place. This trip gave me some interesting feelings ~ 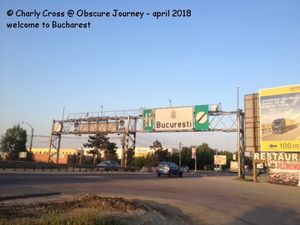 First of all, i thought i knew the city pretty well so i didn't expect getting lost. I also thought its really hard to get lose and especially not be able to locate the transportation i need easily. Then there was the uncomfortable feeling of the area, which i didn't feel very often at all. Bucharest is generally a safe city with no problems, so i wonder where does that come from...
And the tiredness. I feel i'm becoming an old person since I got tired so fast.

All in all this has been an interesting experience, but not one i am about to repeat anytime soon. The mall managers should definitely do a better job at explaining where its located so that shoppers don't put their hopes up in the first place....or maybe it was just a ghost mall that could never be found, o.o. Now that would be quite a twist....

Hopefully you didn't get too bored, if you managed to get to this point.